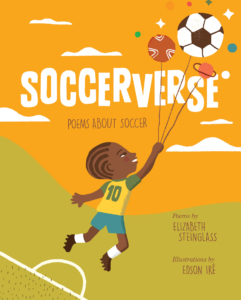 The perfect gift for young soccer fans, this picture book features twenty-two imaginative poems that capture all aspects of the world’s most popular sport.

From the coach who inspires players to fly like the wind, to the shin guard that begs to be donned, to soccer dreams that fill the night, Soccerverse celebrates soccer. Featuring a diverse cast of girls and boys, the poems in this collection cover winning, losing, teamwork, friendships, skills, good sportsmanship, and, most of all, love for the game. Elizabeth Steinglass cleverly incorporates thirteen different poetic forms throughout the book, defining each in a note at the end, and Edson Ikê’s bold artwork is as creative as the poems are surprising.

Check out my new Discussion and Activity Guide for Soccerverse: Poems about Soccer. The 11-page guide includes a range of discussion questions and writing activities for children 5-12.

“Twenty-two poems celebrate, from a young person’s perspective, the beautiful game that is soccer.

Two poems offer the viewpoints of a pair of shin guards—one of them left on the field by accident after the last game. A wry observation about “Fans” is spot-on: “I like it when my parents come. / I like that they are near. / But when they yell instructions, / I pretend that I can’t hear.” A poem for two voices in which one player speaks Spanish and one English happily concludes: “Si! Juguemos! / Yes! Let’s play!” (The Spanish voice uses English punctuation conventions.) A player contemplates the difficulty of offering a handshake to an overly aggressive opposing player at game’s end. Another, carded for an infraction, is relieved to have his apology accepted. Ikê’s digitally created art is stylized and full of motion. His lighthearted illustrations incorporate some poetic fantasy elements and flourishes, such as an inventor creating a perfect teammate: mostly feet for a field player; hands for a goal keeper. Most of the players display a range of skin colors and hair colors and textures; a preponderance have short hair. Each poem uses one or more of 13 poetic forms described briefly in an author’s note—something that will surely charm teachers and aspiring poets.

A pitch-perfect ode to the details and delights of playing soccer.” 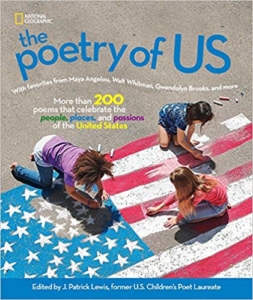 The Poetry of US: More than 200 poems that celebrate the people, places, and passions of the United States, edited by J. Patrick Lewis, 2018. 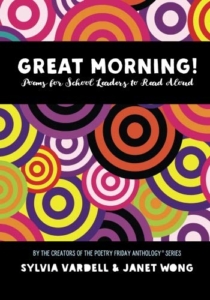 “All Kinds of Kids” 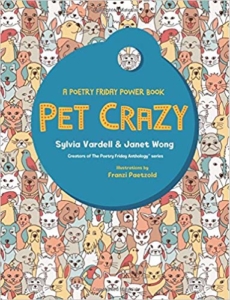 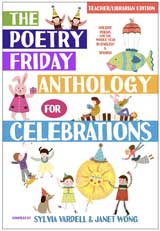 “Looking for a Book: A Dialogue with a Librarian” 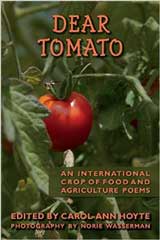