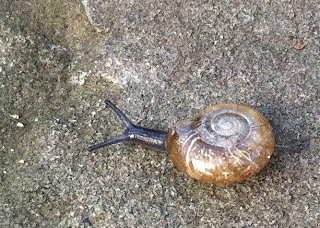 You might think
This mobile home’s
A perfect fit
For those who roam,
But this big wheel
Tends to sag,
So, actually,
It’s more of a drag.

I confess I have this fantasy that somewhere there’s a writer who is so amazing, he or she doesn’t have to revise. But I know in my heart of hearts that this perfect first-draft writer doesn’t exist. Everyone revises. Revising is part of writing. It’s necessary, and sometimes it’s even fun. It can be a process involving play, exploration, and discovery. I like looking back at what I’ve written to see what I’ve said, what seems to want to be said, and then revising to say it more clearly or artfully. As someone who enjoys revising and as an observer of kid-writers who tie themselves in knots trying to write perfectly the first time, I’ve been wanting to share some of my revisions. So below is the first part of what happened between finding the snail and this week’s poem. This is straight from my notebook:

Maybe you think
It’s so convenient
To have a mobile home?
Actually, if it has no wheels
It’s actually kind of a drag.
Drag sag wag brag tag flag bag gag hag jag lag nag rag stag
Actually it’s hard to wag
And since it’s heavy
It’s more of a drag.
Actually
it tends to sag
and it’s hard to wag
So having a shell
Is honestly,
More of a drag.
And it has no wheels
So it’s more of a drag.
You might think
I have cause to brag
I think you can see that my first attempt wasn’t so much about writing a good poem as it was about getting an idea going—discovering a seed that I could tend and grow. I also think you can see that I found that seed there right in the first five lines—the snail’s point of view, the misconception, and the word drag. Where did these ideas come from? The snail. This poem started when I leaned over to get a good look at the little guy, and I was struck by how hard he seemed to be working to drag that shell around.
I think you can also see that I pretty quickly settled on the word drag because of its double meaning. Once I decided to go with drag, I had the voice of the poem, and I had the beginning of the rhyme scheme. I then started exploring different options that rhyme with drag, like wag and brag. You can see that after a bit of experimenting, I went back to some words I had early on—mobile home, wheel, and sag. Once I had these pieces, the rest came together without too much trouble.
When I look back at my process, I think maybe I don’t need that fantasy of the perfect first-draft writer. I think maybe that perfect first-draft writer is missing all the fun.
For more Poetry Friday see Robyn Hood Black at Read, Write, Howl.