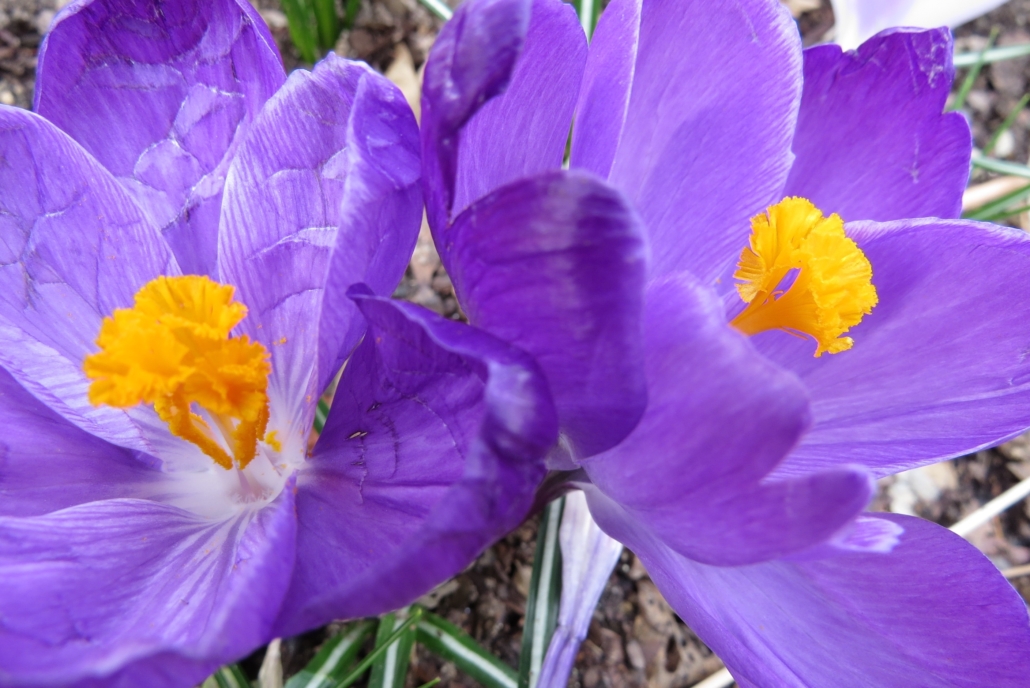 Suddenly a crocus
Pops out of the ground,
Rushing purple and yellow
Into a world gone brown.
Neighbors passing by can’t help but
Grin.

I admire Avis Harley’s acrostics. I think they work especially well when the word or phrase being spelled out doesn’t appear in the poem. I tried to make the letters purple, but alas they insist on being blue.

Have I mentioned I love spring?

I have been writing haiku for a few years now, and over that time I’ve become increasingly interested in renku, a linked form composed by multiple writers. As writers often work alone, I find the idea of writing together very appealing. I am also intrigued by the guidelines renku leaders follow around themes and when they should appear and the intuitive ways the verses link to one another.

At the end of his essay “A Personal Introduction to Renku,” William J Higginson writes, “Enjoy a renku as you would enjoy music, for the varying motifs which come and go, threaded through the rhythms of first one voice, then another. Catch, if you can, how one verse adds meaning to what went before, and then changes its own meaning as the next follows. These changes, lightly governed by a variety of guidelines, should appear as simply the continuing flux of life.”

Isn’t this lovely? And oddly non-narrative?

I first learned about renku through “Thunder Moon: A Renku Party,” an episode of the Haiku Chronicles podcast. I had been wondering how to find one to participate in, when I discovered that The Haiku Foundation had just started one on their blog Troutswirl. The leader Marshall Hryciuk, who has led 40 renku sessions, opened with a three line hokku.

In the comments section below, writers offered possible verses to follow. Marshall replied to each with his thoughts about why or why not it would make sense as the next verse. He then selected one and suggested guidelines for the next verse. The renku currently has three verses and writers are suggesting possible fourths with the caveats that the next verse should be two lines, the season should be autumn, perhaps indoors, and should not refer to moonlight, animals, flowers, or precipitation!

These are just the kind of limits that inspire creativity, right?!

Though a novice, I bravely wandered in, proposing the following:

Marshall kindly and generously suggested the verse might be better as:

unwinding the orange
in one long peel

I have to admit I agree that his suggestion has more power, I think because orange is a stronger color and all oranges are orange and apples can be many different colors. He also guessed that perhaps I had gone with apple because it was more autumnal and encouraged me to follow my instinct.

Perhaps it wasn’t the most successful verse as a verse, but it was my first baby step in learning about a fascinating practice, and it was fun.

april fool
I short-sheet the bed
then forget

Like haiku, senryu offer a moment of realization in a single breath. While haiku are about nature, senryu are about human nature.

To learn more about haiku and senryu, I recommend listening to Haiku Chronicles, a podcast hosted by Donna Beaver and Alan Pizzarelli. In this episode they specifically discuss senryu. I love listening to these podcasts when I walk.

My favorite place to read senryu is in the on-line journal Prune Juice. 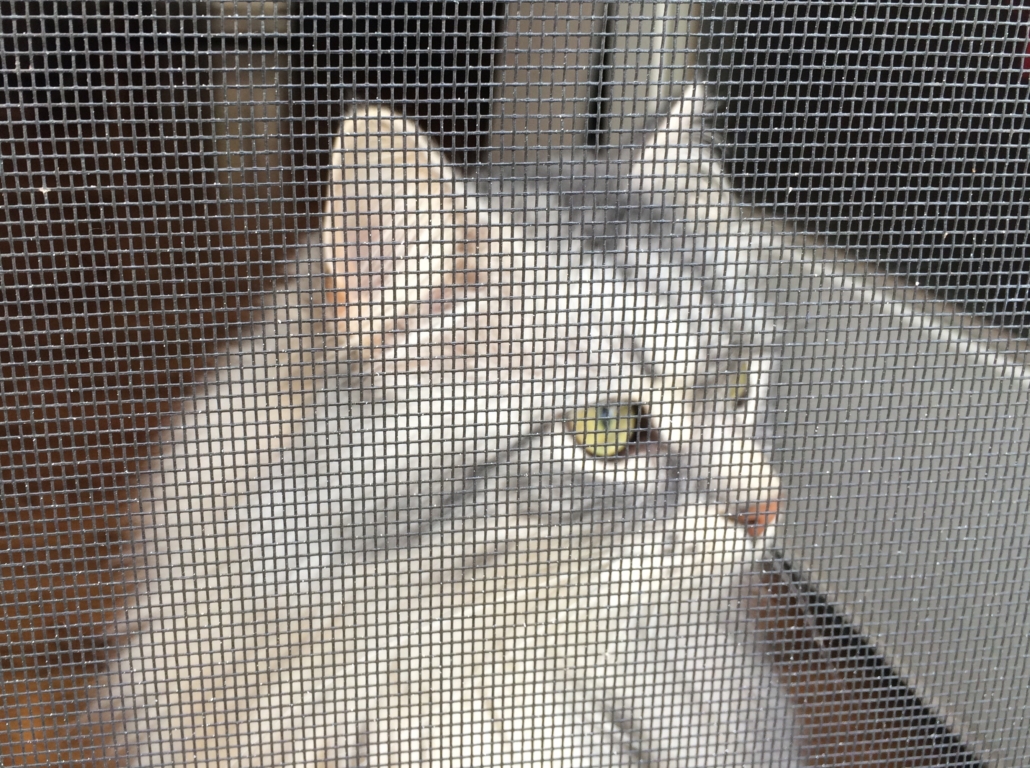 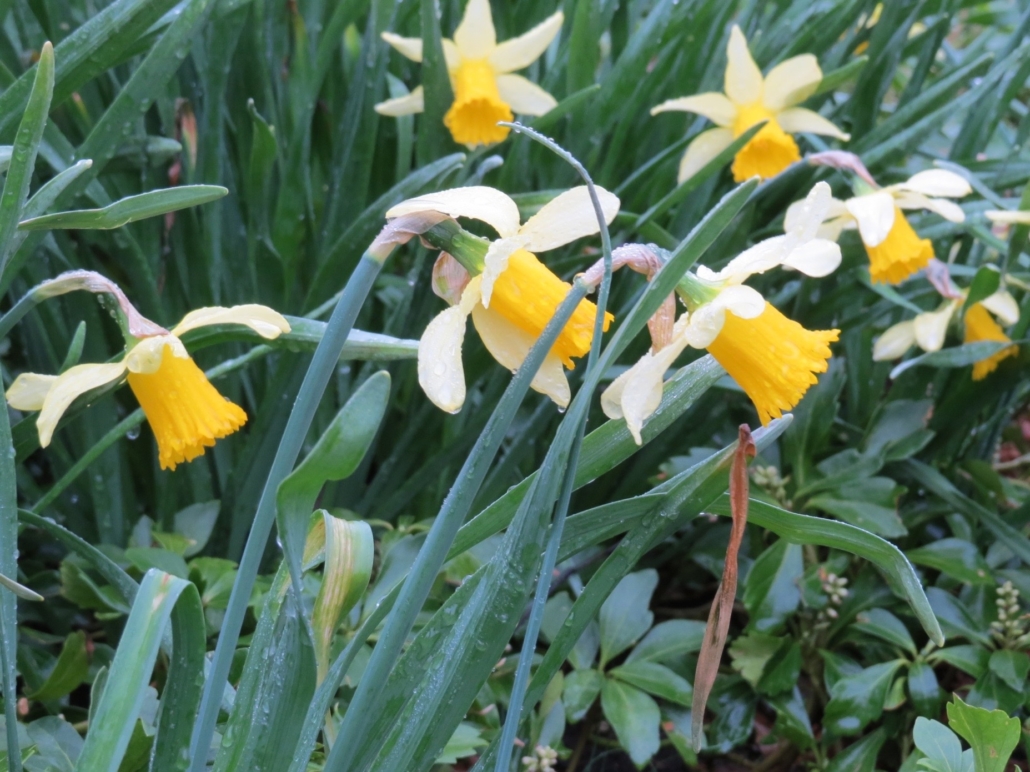 gray morning
even the daffodils
drop their heads

I’ve been working on two great poetry projects. Oddly both of them are taking me away from the natural world around me. As spring awakens I’m feeling a growing need to reconnect with everything outdoors. Nothing draws me closer to the world than haiku, so I’ve been spending more time reading and writing them. I have a few wonderful anthologies, but lately I’ve been re-reading Haiku in English: The First Hundred Years, edited by Jim Kacian, Philip Rowland, and Allan Burns. I’ve been going through and tagging my favorites and then copying them out in my notebook. Copying helps me pay close attention and internalize them. When I want to write, I go for a walk. I walk slowly and look carefully. I bring a notebook and scribble words and phrases. At home I transfer them to my computer and develop them into complete haiku. My goal is to give my readers the same experience of noticing that I’ve had, without getting in the way and interpreting it for them. I wrote these haiku this week as spring finally settled in. I hope you enjoy them.

For more Poetry Friday visit Robyn at Life on the Deckle Edge. 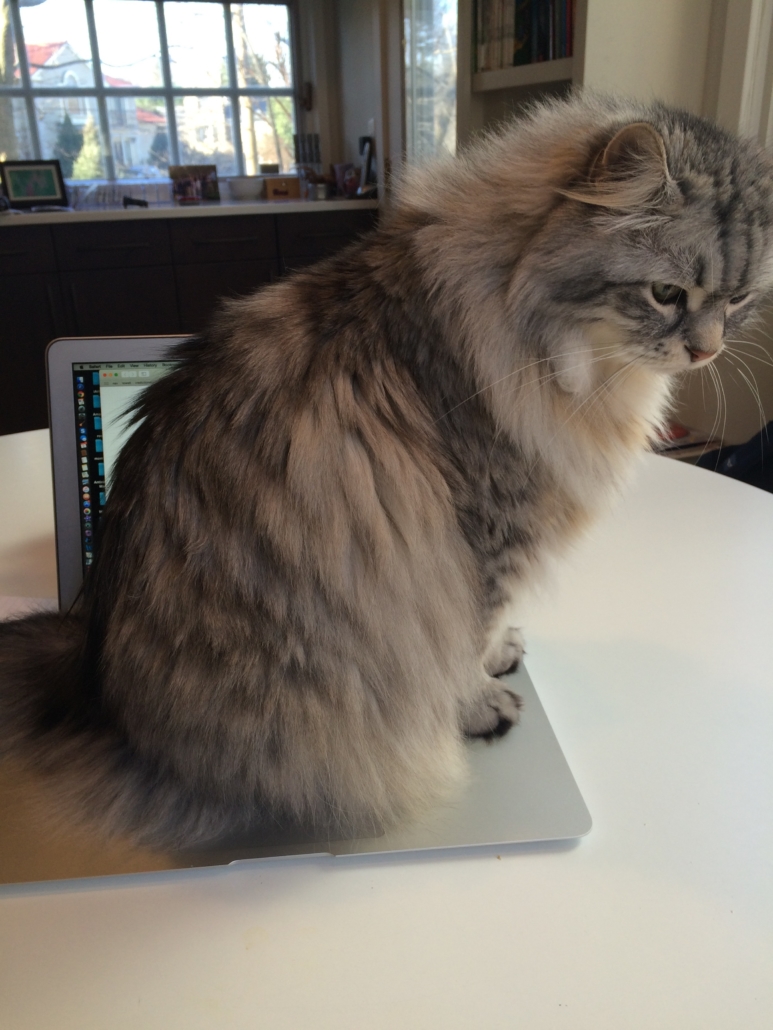 A much-loved obstacle to my process.

I know it may seem a little odd, but today I greet you not with a poem, but with two quotes I’ve been thinking about.

The first is from the photographer Sally Mann’s memoir Hold Still:

“Maybe you’ve made something mediocre–there’s plenty of that in any artist’s cabinets–but something mediocre is better than nothing, and often the near-misses, as I call them, are the beckoning hands that bring you to perfection just around the blind corner.”

I love the reminder here that producing something–anything–is worth the time. Sometimes I fall into the trap of feeling that the time I spent writing was wasted if I haven’t produced something I could share. Mann reminds me that I need to change my definition of progress. Progress can sometimes be the terrible poem or terrible draft that ended up crumpled on the floor. My favorite part of the quote is actually “blind corner.” There you are writing badly, again and again, and then, surprise, all that struggle and learning pays off, and you had no idea it was coming when it did.

The second quote I want to share is from the painter Chuck Close:

In a way it’s quite similar to what Mann says, but for me, this quote puts the emphasis on what’s happening during the process and the near-misses. That’s where the creativity lives and grows. It may be inching along, or going in the wrong direction, or striking hard and fast like lightning, but it’s happening while the artist is working, shooting film, painting canvas, typing words.

This week I was working on a poem about a lawyer at work. (I’ll explain another time.) I started off with a fairly clumsy and boring draft. I went back in. This time as the lawyer’s brain filled with facts, it became a carefully packed grocery bag and in the end an artichoke came out. I liked the artichoke, but I didn’t really think it worked for the subject. Okay, something full, but not a grocery bag, a tool box? That seemed promising until it was time for him to pull things out, and I realized I didn’t want him using a wrench or a screwdriver on anyone in the courtroom. I went back in, and this time his mind was like a map covered in streets and dotted with points of interest, and his argument was like giving someone directions. I could not possibly have come up with this staring at a screen. It was in the process, the work, the near-misses that I came to something better. It’s too early to say yet whether I’m done, but I do feel good about my progress.

Please leave your link below, and if you like, share some thoughts on process or even a favorite quote. I look forward to reading your posts. 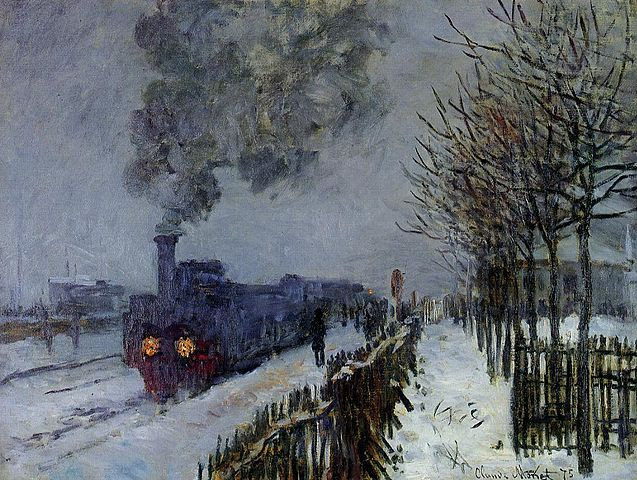 Maybe it will snow.
Maybe it won’t.
Either way the dark will snatch more and more of the day,
more than its fair share,
more than the accepted amount,
leaving us leaning into hibernation,
unable to disentangle ourselves from our blankets,
lacking all interest in rising and shining,
too tired to hope,
until finally,
spring fights back.

Tabatha Yeatts organized a wonderful winter poem swap and sent the image above for inspiration. Monet’s painting and the gray winter skies inspired the poem above and a few more that were equally dark. My family told me in no uncertain terms that the poems I was writing were too depressing for a gift, so I went back to the drawing board for a slightly more positive spin on the season. If you’re curious to see it, Tabatha has it on her blog. Thank you to Tabatha for organizing another wonderful swap and for allowing me to vent and then find a more positive outlook. 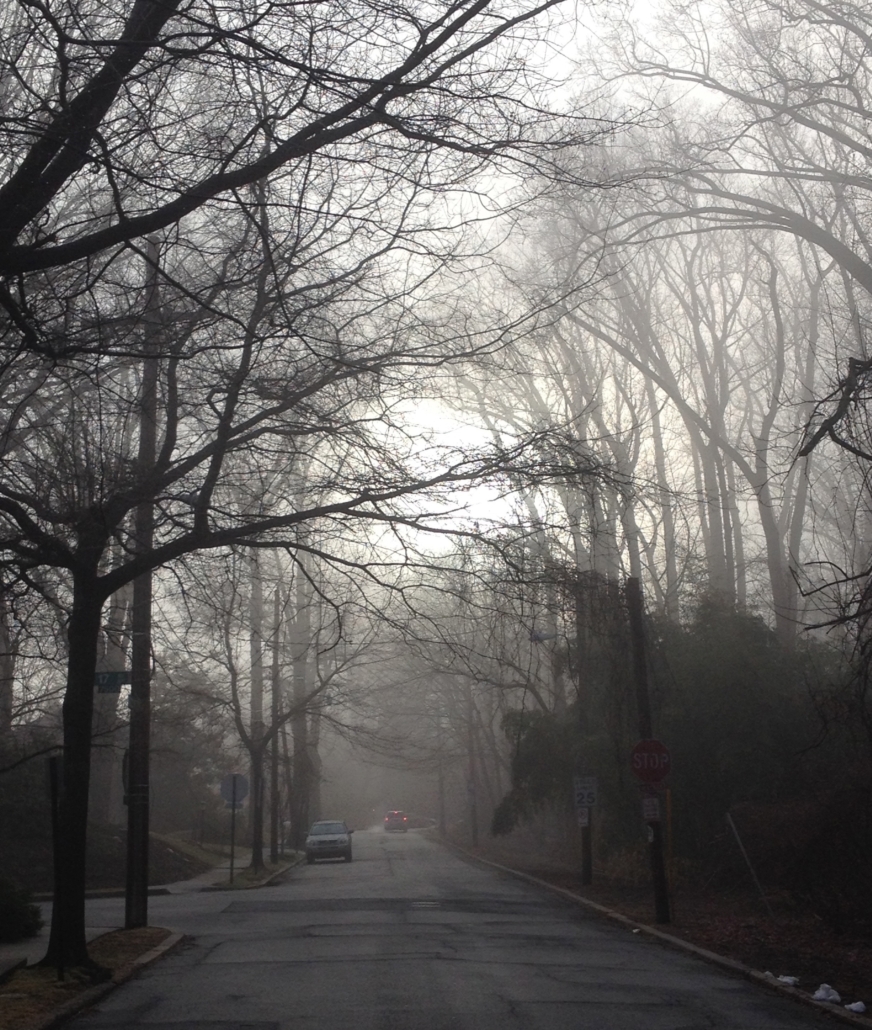 A fog was drawn across the earth
between all things and me,
but I did not see less of life—
I peered more carefully.

Sometimes I give myself exercises to do. I think of them like push-ups or sit-ups. Lately I’ve been feeling my meter needs more work, so this week I did some extra iambic quatrains. Of course I read some Emily Dickinson to get in the mood.

For more Poetry Friday, visit Bridget at Wee Words for Wee Ones. 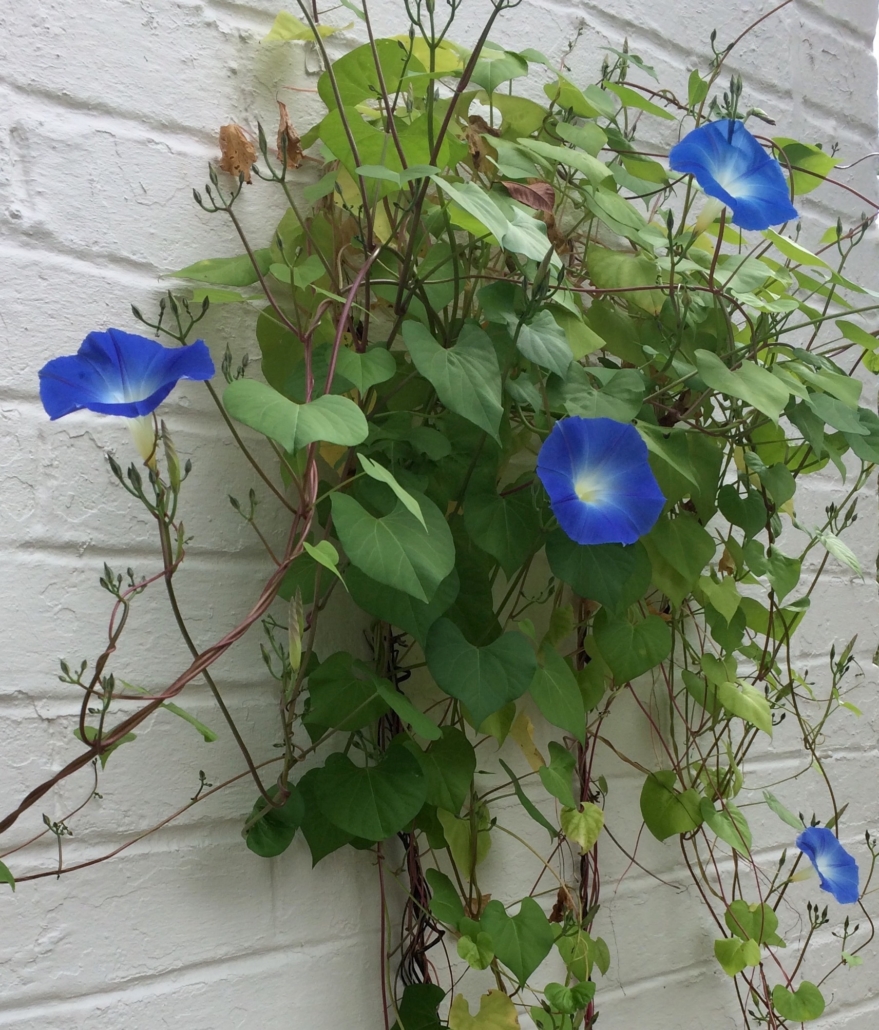 Discarded leaves disgrace the lawn.
The sky grows pale and sighs.
Above the unmade garden beds,
the morning glory shines. 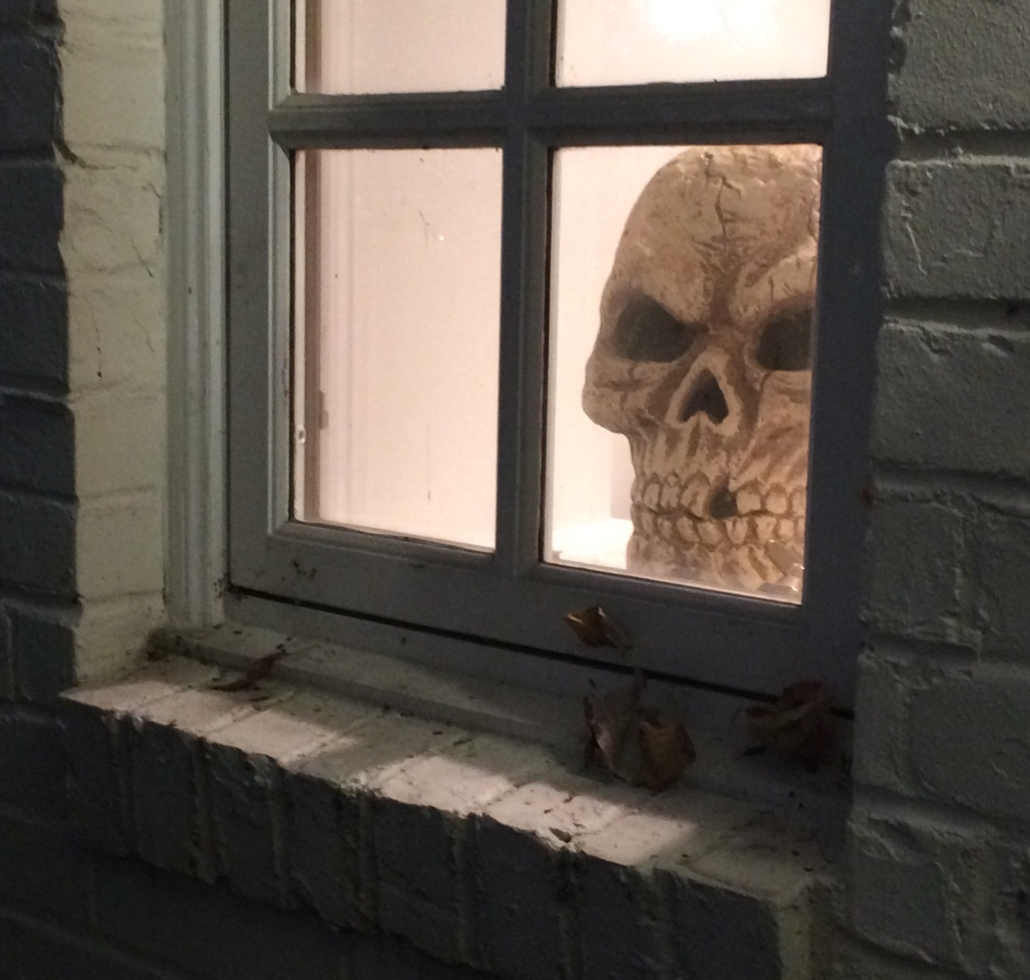 eyes
in the ivy
in the dark

unearthing the skull
in the basement
setting it in the window 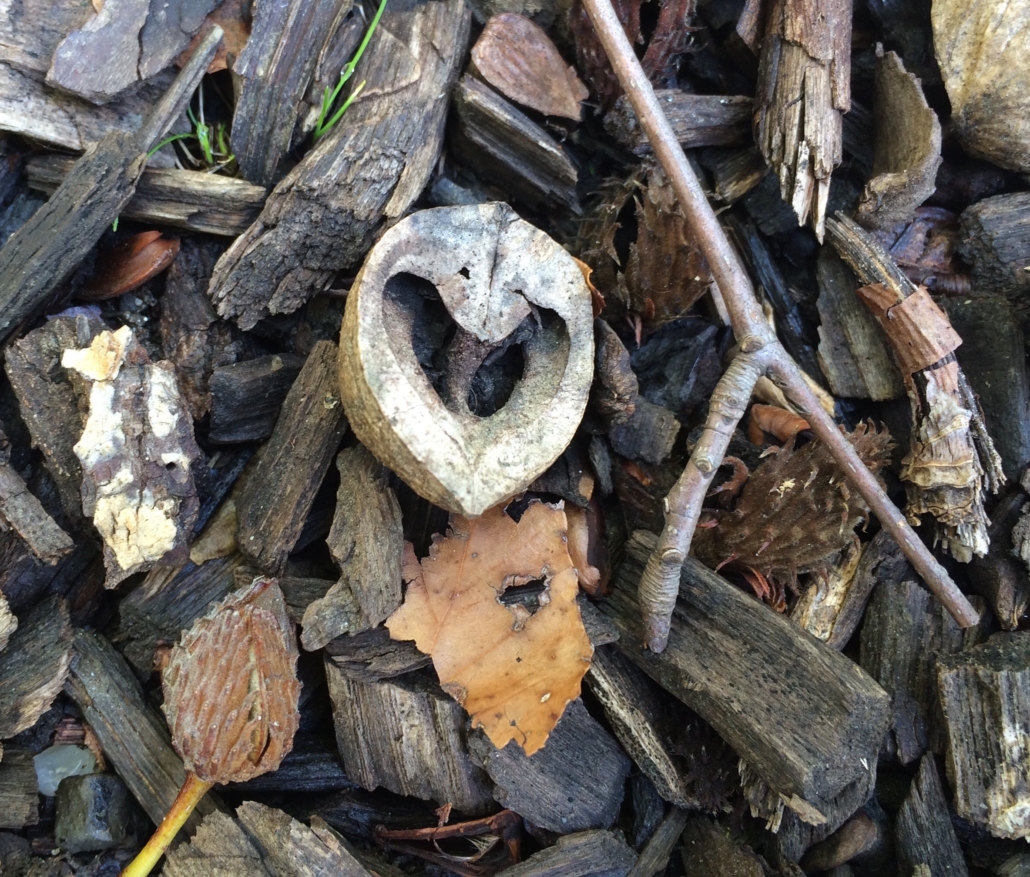 the open heart
inside the shell
black walnut

the torn wing
of a butterfly—
evening chill