There once was a boy with a stick
Who wanted to try a cool trick.
He threw the stick up,
Held his hands like a cup
And grasped the fine point of the stick.

There once was a girl who loved rhyme.
She rhymed when she talked all the time.
Her friends grew to hate
This maddening trait
And prompted her interest in mime.

A few weeks ago I wrote about why I think we could all benefit from spending some time reading and writing haiku. This week I want to advocate for a very different form—the limerick.

Here’s why I think kids, and their grown-ups, should study and write limericks:

2. Limericks have a strong, easily identifiable rhyme and meter.

3. Because of #1 and #2, limericks provide a perfect jumping off point for the study of rhyme and meter.

Lately, I feel like I’m reading more warnings against writing in rhyme and meter and even against teaching children to write in rhyme and meter because it’s so hard. It is hard. Often the difference between an excellent poem and a poem that makes you wince is the rhyme and/or meter. Rhyme and meter are basic elements of poetry, music, language, and humor. We can’t give up! We need to study and practice and work. Limericks provide a great opportunity to do that work, while also having fun.

For anyone who’s interested, here’s one possible approach to teaching the limerick:

1. Read a limerick out loud and have the kids read it out loud multiple times, until they can nearly sing it by heart.
(Be sure the example follows the rules of the form very closely.)

Here’s a classic by Edward Lear:

There once was a man with a beard
Who said, “It is just as I feared!
Two Owls and a Hen,
Four Larks and a Wren,
Have all built their nests in my beard!”

3. Show the kids a different version of the same limerick that disrupts the rhyme:

For example, with apologies to Mr. Lear:

There once was a man with a beard
Who said, “It is just as I dreaded!
Two Owls and a Hen,
Four Larks and a Jay,
Have all built their nests in my hair!”

You might want to mention that Lear’s limericks often use the same word at the end of the first line and at the end of the last line. Sometimes contemporary readers don’t seem to feel comfortable with this rhyming of the word with itself.

4. Show the kids another version that disrupts the meter:

For example, again with apologies to Mr. Lear,

Once there was a man with a beard
Who exclaimed, “It is exactly as I feared!
Owls and white Hens,
Twenty-one Larks and Wrens,
Made nests in my long beard!”

I think that by comparing this version to Lear’s, kids can see for themselves the importance of getting the meter right.

5. Give the kids another messed up limerick.

Here’s another Lear limerick I’ve taken the liberty of ruining:

Once there was a Young Lady of London,
Whose shoelaces were almost never untied.
She bought some clogs,
And some tiny spotted cats,
And frequently galloped about Ryde.

There was a Young Lady of Ryde,
Whose shoe-strings were seldom untied.
She purchased some clogs,
And some small spotted dogs,
And frequently walked about Ryde.

6. Finally, ask them to write their own limerick. I think it’s important to mention that it’s harder than it sounds. I would also provide opportunities to get help—either from partners or the whole group. And as always, when I ask kids to write, I write. I want them to see that I’m willing to take on all the risks and challenges I ask them to take on. Often I’m the very first to ask for help.

For more Poetry Friday, visit Laura Salas at Writing the World for Kids.

Next week, Poetry Friday will be here!

Keeper
Reading the Game
Thinking Outside the Box
Stars!

How Soccer Explains the World

Kick,
Striker Boy.
Kick the Balls.
Shoot to Win
Glory.
Dream On,
Young Blood.
The World is a Ball.

Two of our family obsessions are soccer and books, so I’ve been meaning to try a soccer book spine poem for a while. I think they’re a fun reminder that one can love both sports and books.

For the second year running, Irene Latham, of the blog Live Your Poem, has organized a unique celebration of National Poetry Month. Each day a poet contributes one line to a slowly unfolding poem. Today, on the 16th day of the month, I am honored to contribute one more line.

When you listen to your footsteps
the words become music and
the rhythm that you’re rapping gets your fingers tapping, too.
Your pen starts dancing across the page
a private pirouette, a solitary samba until
smiling, you’re beguiling as your love comes shining through.

Pause a moment in your dreaming, hear the whispers
of the words, one dancer to another, saying
Listen, that’s our cue! Mind your meter. Find your rhyme.
Ignore the trepidation while you jitterbug and jive.
Arm in arm, toe to toe, words begin to wiggle and flow
as your heart starts singing let your mind keep swinging

From life’s trapeze, like a clown on the breeze.
Swinging upside down, throw and catch new sounds–
Take a risk, try a trick; break a sweat: safety net?
Don’t check! You’re soaring and exploring

Here’s the month’s calendar so you can follow along: 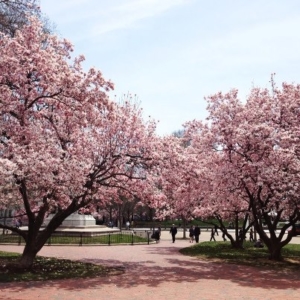 How to Write a Poem

To write a poem
Go out the front door.
Walk around
Your neighborhood,
Following your nose
Down this or that street.
Cross for the latest bloom.
Track the ants to their castle
Of dust. See where the bees
Dance their maps. Crawl
On your belly. Open your mouth
And funnel the dirt through you
Like a worm. Listen to the rhythm
Of your footsteps and the song
Of passing cars. Eat daisies.
Smell asphalt. Rub your elbows
On oak bark. All the while
Compare your trip to a bird
Or to death. But if you want
To write something new,
Go home. Go up to the attic.
Open a window and

I got another rejection this week (Can we please agree to stop calling it this? How about a “pass?” Anyone else have a suggestion?). Getting a “pass” is too common to be noteworthy. What was remarkable was that the editor said I was close and told me which of the poems he preferred. (Because he replied to me like one human being to another, I didn’t actually feel rejected.) As I considered the two poems he mentioned, I realized they had something in common, not in terms of the product, but in the process that had produced them. With both, I had somehow let go. I had stopped writing from my head and wrote from my gut. I had gone up to the roof and jumped and out in the air, I had caught something a little more unusual.

To metaphorically jump, I literally did something like a cross between free writing and brainstorming. I wrote as quickly as possible, without judging or revising, or even developing any one idea. I tried to get out as many different approaches as possible. Only after 20 or 30 or 40 different options did I go back and see if there were a few I wanted to develop. I think that by writing quickly and getting out as many ideas as possible, I was able to get off the well-worn paths and find new associations and connections.

What do you do when you want to get past the usual?

Jama Rattigan has an extensive list of Kidlitosphere events celebrating our favorite month.

Irene Latham is once again hosting the Kidlitosphere Progressive Poem, which I’ll be contributing to later in the month.